What exactly is the Climate and Ecological Emergency Bill? (CEE Bill)

If it is passed as an Act of Parliament this would be game-changing legislation and ensure that Government develops an emergency strategy. It would also accelerate the ability of local authorities, such as Dorset Council and all our Town and Parish Councils to tackle the C&EE and rapidly reduce carbon emissions.

Part 1 - focuses on reducing CO2 emissions to keep planetary heating down to 1.5 degrees. This will minimise extreme storms, wildfires, floods and other effects of global warming that we are already experiencing, even here in Britain and in Dorset. Includes emissions from aviation and shipping, and those from imported goods.

Part 2 - sets out the requirements for conserving and restoring ecosystems and soils – protecting wildlife and the places we love, and absorbing lots and lots of carbon into woodland and plant life.

Part 3 – how we make the decisions we need. Calls for a Citizens’ Assembly to help Government and Parliament create the strategy to make it happen – people-backed bold decisions, avoiding party political differences and tensions - where citizens have a real say in choosing a fair path to a zero carbon society and a thriving natural world.

It had its 1st reading in Parliament in Sept 2020. To date 100 MPs (and counting) across 7 political parties have openly declared their support for the Bill.  We need more, so let your MP know you want them to support the Bill before it goes to Parliament for its second reading – probably in May.

The Dorset CEE Bill Alliance asks you to:

We also need Dorset Council to back the Bill publicly saying so and telling Dorset's MPs to get behind it.  In May 2019 Dorset Council declared a Climate and Ecological Emergency and has a Strategy and Action Plan – which includes lobbying MP’s and Government to unlock resources and change national policies.

However, Dorset Council have refused to accept a motion to Full Council on 15th April 2021, submitted by Dorset Council Councillor Maria Roe. This means they would not allow the motion to be read at the meeting, debated by Councillors with a vote to support the Bill or not. The motion outlined the importance and relevance of the CEE Bill and asked Dorset Council to support it. Cllr Roe has been an appointed member of Dorset Council's Climate & Ecological Emergency Executive Advisory Panel and you can read her very reasonable motion via the link below.

Time is not on our side.  We are now in THE critical decade of human existence.  Scientists have calculated the carbon budget that we have to live within, in order to have just a 66% chance of avoiding global warming in excess of 1.5C.  That budget is 420 billion tonnes of CO2.

Yet, so far nothing has worked.

Despite all the international conferences, all the promises made by so many governments including our own... and the Covid-19 lockdowns...greenhouse gas emissions have relentlessly continued to increase.  At the present rate of emissions we will exceed our carbon budget in the next 10 years.

Help change the game...ask your MP to back the Bill!

• Make a video or take a pic. Post on social media #CEEBill / #Your MPs name @CEEbill_NOW

If this Bill becomes law it will help safeguard our future, and the future of our children and grandchildren.

We need all five of our Dorset MP’s to support the CEE Bill (one will be a good start!)

Click on the image below to petition Dorset MPs. 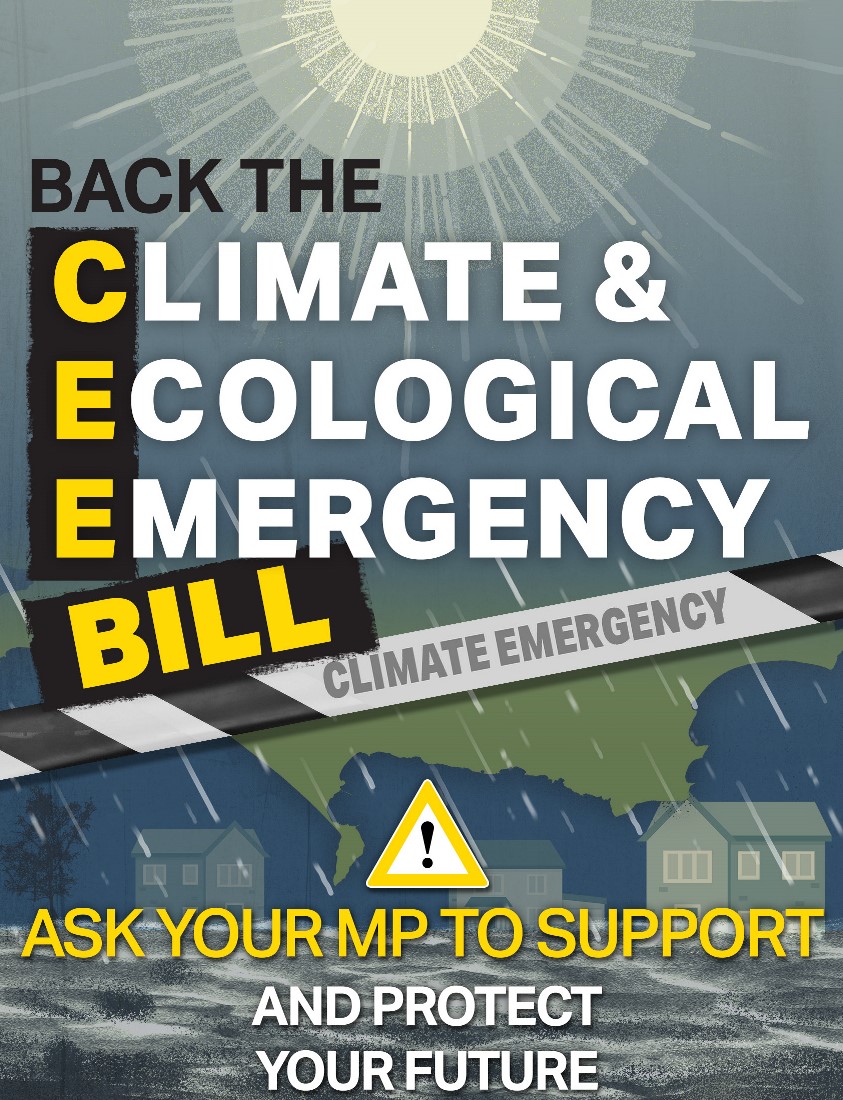 ACT NOW! WRITE TO YOUR MP

Explain why it’s critical to back the Bill

Write from the heart e.g. I’m asking you to support the CEE Bill because…I want a future / for my children / nature is precious and it’s being destroyed, etc.

If you are unsure who your MP is click here and enter your postcode.

If you need any help, contact Julie-Ann Booker or Caz Dennett 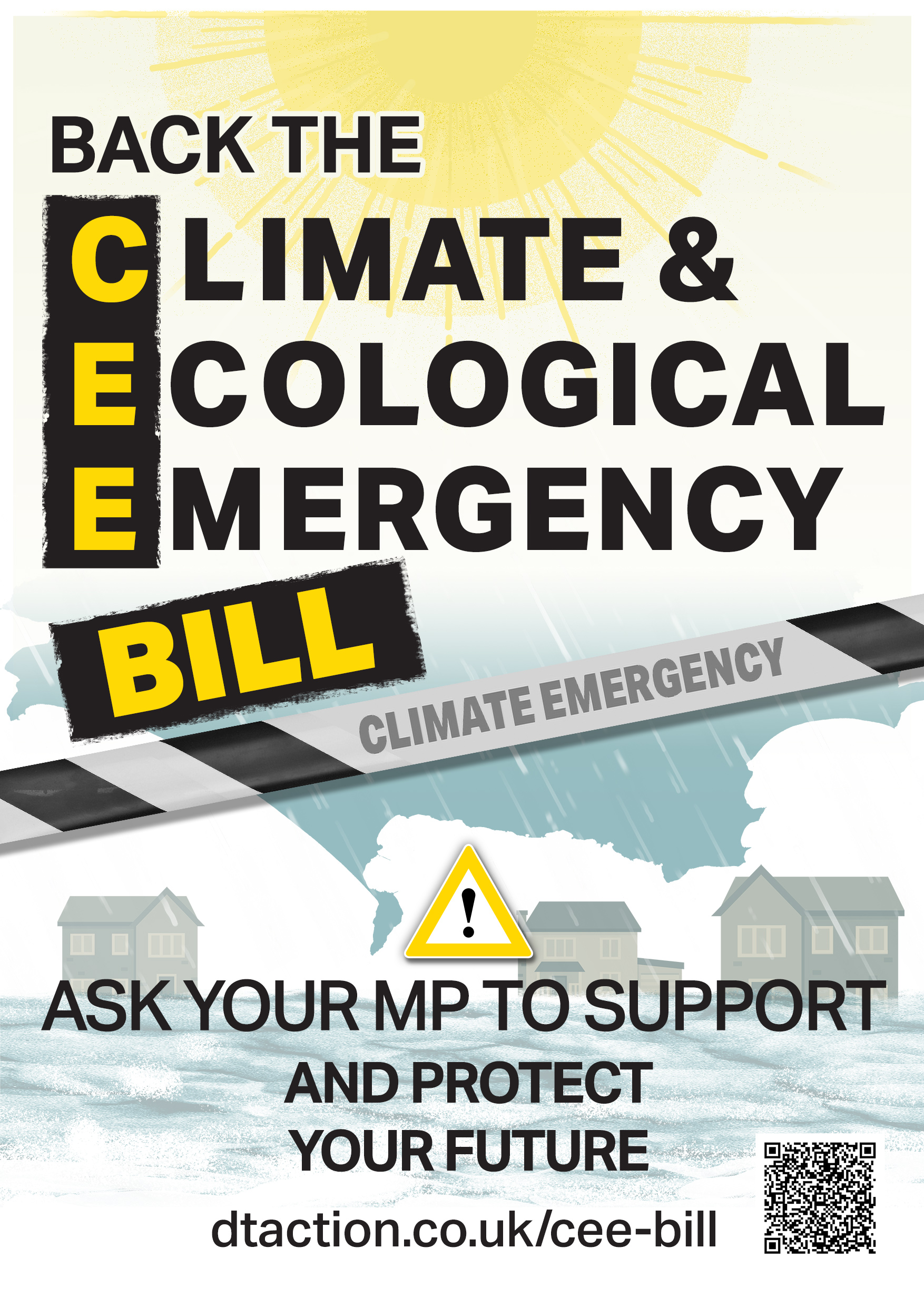